Tottenham new Boss Conte, has put a call across to Nigerian ex players, Mikel Obi and Winger Victor Moses over a possible return to the Premier league.Victor Moses and Mikel Obi in Tottenham. Mikel lost his place in Chelsea under Conte regime and was later sold out from the club, then while looking for him now? For Victor Moses, if he knows what is good for him he better remain at where he is, cause the coach may not last for long at Tottenham Hotspur, when when that happens, getting another club as an average player may hard him. 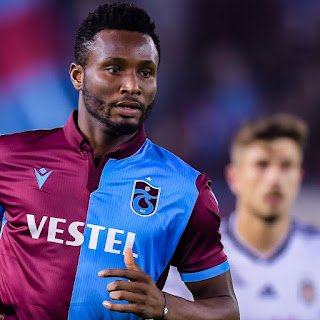 Mikel obi is wreath to deliver but resaint development in stock show that he is finish let him retire while Moses Victor much more in him to give out, anyway I am congrats them both to back in premier league to create more story for told,I wish them luck n best performance,

Conte sabi to help club waste money, but he also have a style to get some results sometimes, he should have just try to do with the players he have now till end of the season, win Europa league to get into Champion League next year, and buy lots of quality players as much as the club can afford and contend for the League Title next season.

Wow! This is a welcome development to see our brothers at English premier league again I salute you sir for this wonderful invitation.What's the brain behind the reason for terminating Mikel's contract by his Qatar's club that, he lacked skill and he couldn't run past meaning he's old now. Can he fit at Spous? and help to boost the current squad of team? Wish him best of luck.

Is going to be a good step And Tottenham will come back with a good spirit, I can say is that the coach have seen something in them before he goes to them, my man conte go ahead may the spirit of one spirit come into you! Etc.He is an intelligent Man He knows that they're some areas you applied old method

All of you shouting welcome development up and down let me ask you is any of just starting their playing career or is it that you all have forgotten that they both have enjoyed success in the EPL. Am pretty sure none is answering this missed call. He is going to always get their likes of players still from Africa that will deliver same result and play with good age so conte can’t bring them back.

I think it's high time Nigerians start appreciating what they have. Both Victor Moses and Mikel Obi are good players differently and still relevant though not necessarily based on their ages but their wealth of experience and expertise on the pitch. There might be a uniqueness of the experience Coach Antonio Comte must have seening in them to have called for these players that might easily pave ways for him to succeed with Tottenham. But to many of their critics, have you asked yourself the question : WHY is Rohr as Nigeria national Team coach needed Odion Ighalo in his team  I drop my 2 pens

Wow this to show u how an intelligent coach know the player who can offer something to a particular team at a particular time I will like to see our own brothers doing good things at England one based on my intellectual capacity and my vast knowledge, tactically and tentatively, right from the beginning, of times especially in the light of Ecclesiastes evolution I have come to a concrete, definite and profound conclusion that I actually have nothing to say to u thank you, When one door closes another one opens. Obi mikel just lost his contract with a team he barely even have 90minutes of play in Kuwait see what has happened.

I remember the positive role Obi played during his time at Chelsea. deep six( John O'Shea used to find it hard whenever United could meet Chelsea).Conte believes so much in victor Moses. And he is the only coach, that knows how press Moses button. That makes him to be so explosive in football games.For what Mikel to me does not have the energy to play in the English premier league again if that happens it will be another Ighalo Man u move