Ole is so lucky along with Arteta for still retaining their respective Jobs as managers of these great clubs.So sad things have gone from bad to worse especially for Ole.This is his fourth season in charge of United without a silverware.Arteta at least managed to have won FA cup and Community Shield cup respectively at the same season. I feel sorry for both. When you play against steam like city with all experienced players you can NOT put the least experienced player like Greenwood against them as a starter. 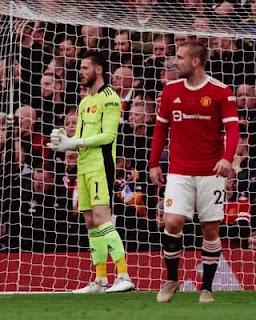 I am a die hard Utd fan, I have totally lost my hope on Utd from the beginning of the season. Its quite unfortunate that Utd has become a club were hiprocrcracy, partiality and favouritism rules. The Board and the inexperienced ex players of this club are responsible for Utd deeming form. Ole has absolutely nothing to offer Utd yet he keeps getting the praises bcos he is one of their own. Jose was not even supported like this but he won trophies and gave Utd incredible points but he was sacked. Why keeping Ole for three whole season. I was so surprised yesterday seeing him as usual sitting down relaxed and crossing his leg when his team are 2 down..Pep was even standing shouting and dishing out instructions. Its shows the level of confidence ole had. I wept for Utd ..

I’m not a fan of either, but Man City is currently a better team and coach than Manchester United. Until they bring new players and a new high profile coach things remain the same for Man United.if Jose has given the opportunity given to ole to buy any choice of his player, believe me, utd will dominate England till now. But this ole, I don't understand him, yah neh,even though ole is one of our own,i think its time for him to go.He's been too long there with not bringing silwer home.If any other person would manage United like this,believe me he would be long gone, I agree big time, at this moment is the Manchester United Organization to blame. I have seen some other big teams in United levels on points got ride of they managers, Barcelona n Tottenham. you are right. Jose had nothing but he won us three trophies including Europa and also finished second with a commendable points. I still remember Jose telling the press how important finishing second was for him..he listed it as his one if his greatest achievement..this was directly to point out that the players he got were nothing.Lol...Man City plays with so much confidence in themselves... I think the coach has a way of making them beileve that, individually and as a team they are better than others. So, they attack rerentlesly like The Roman Soldiers.

Man utd played complete nonsense. They should have Mastered the art of playing long passes and space out a little bit.The formation should be 3-4-3. be crowded in their side of the box and the other side. Ensure to play long passes out of their side of the pitch to the other side. Then long and short passes at the other side inorder to score.If there were ever a time when we can justiably advance the argument "trust the process," especially given the 5 star shift that Ole's boys put in against their noisy neighbours, it's now.

We were just totally clueless across the pitch in every department...how Maguire keeps getting the nod no matter how poorly he plays just explains the shambles we are in!...kids vs men game for me..No doubt, ole is moving the club into a right direction. Getting his own players to shoot on their keeper is another way to train the players. Ole at the wheel,Why all this back pass kind of play? Ole team can't do that perfectly as Bayer Munich n Barça but every game they had played under this man they must give useless back pass that can lead to goal.Terrible back line. De gea showed us all why he’s keeping Henderson at bay. Some of his saves today were outstanding, best of the lot was the close range off his own defender  No play B C or D. Rely on Ronald is them this season. I’m a toon fan, don’t like Man U but as a club they should be better

Wan bissaka ,Luke Shaw ,Fred ,mctominany they are championship players.. People compared Wan Bissaka to TAA like seriously man this bloke don't know how to defend or put a cross in the box..Roy Keane was absolutely bang on about him last week ..Utd spend load of money for average players, Poor, pathetic performance. The team lacks motivation, tactics, game plans and most of all a proper experienced manager.Ronaldo is only good when playing against the likes of Norwich FC never present when the Liverpools and man-city boys are in town.

I said it, play back 5, you lose to them, Back 5 means you've shown a sign of fear before the game started, if you want to stand a chance against man.city, you match them, man to man, They decided to hold on to the ball much longer without seeking for goals. It must've been induced by brotherly love.I know quite well if this were Arsenal, City would've scored more.I guess they want Ole to stay.

There's probably more intensity in City's training sessions than there was in this match. How did we get so bad.I dont know the feeling of ManUtd at UK fanbase feeling rite now, We at other continents feels very bad n even not watching any of the UTD matches since thrashed by Liverpool.Hope the Glazer sort this very so I always enjoy watching this gurdiolas boys,,playing,,Very talented guys you might think they are brothers,,I like the team work,they attack as a team , everyone is a striker,,, including john stones,,,,their defense is extremely concrete,,,,,,,let me stop there I might write a novela trying to explain our city men.

I'm a City fan but i'd supported Manchester united so that ole has ample time to improve united by losing more points to the others EPL clubs. Well done City, Being David de Gea is not easy,imagine defending against the opponent and your own team mates.Not sure how it Will sound in people's ears that the poor and miserable Arsenal will have more points in EPL than the mighty Man u. Bailey even scored more goals than Ronny, Shaw could have intercepted the ball but let it slip to Bernardo that's half an assist. Today is Monday why does Ole still have a job.

Man Utd fans should blame whoever it was that brought Wan Bissaka and Harry Macguire to the team. These two players belong to a mid table team at best. Definitely not a top six club material.In a Manchester Derby Man City have a fantastic team as we all know...But Man Utd have fantastic players also ..and on the day anything can happen nobody can predict how many goals United will lose by, I get chest pains from this team. You would swear I'm not a Man City fan . I just share the pain of my Man United friends.